This extraordinary experience and resulting research led to a 35-year career as an expert in the field of exceptional human performance. Her work focuses on systemic change in the areas of business, education and peace.

Education Pioneer
Marilyn has also presented at over 200 national and international education conferences with academicians and researchers who are designing the schools of the future. She is the co-creator of Dare to Imagine, an inner city Oakland program. Her teacher training clients include YMCAs, park and rec leadership programs, Boys and Girls Clubs and Investing in Oakland a joint project with Mills College and the Mayor of Oakland.

Peace Activist
Marilyn’s most pioneering work, a joint Russian-American venture called “The Peace Team” resulted in two opportunities to speak at the United Nations and an invitation to create a U.N. sub-committee on the role of sport in peacebuilding.

Marilyn’s Gift To You 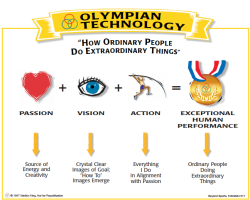 Begin Your Day the Olympian Way for accelerated leadership development. Know what to focus on and how to focus with this guided imagery audio program.